I may be biased, but there is a special sense of belonging or, being around friends that accompanies one's presence at an OzSTOC event. The magnitude of this increases when you are present at an OzSTOC National Rally!

If you've attended an OzSTOC RTE, you know what I mean. EVERYONE is your mate, and EVERYONE has great stories to share of getting to the event, and/or the lead up to it.

Having arrived a little later than planned - due to somewhat inclement conditions, I hurried over to the first event of the Rally - the meet 'n greet.

For me, it is a fantastic experience of greeting old friends from around the country, putting faces to forum monikas - y'know "Oh yeah! You're HIM! Cool!", and of course, enjoying all the new surprises to the family group that you weren't expecting.

Anyway, as merchandise and Rally packs were being handed out, and nibblies and drinks were enjoyed, and acquaintances were being made and re-made, our fantastic roasted meals arrived from the caterers.
The general consensus was that it was wonderful!

No pics this night as I was mingling up to the point of heading off to bed. I was sharing a cabin with the venerable 'Biggles', and the immortal 'Saaz', so I hads to be on me guard! I'll never forget looking over at Biggles' meticulously, fastidiously and persnickety prepared boudoir, and then up at Saaz's ramshackle, disheveled and slipshod digs. Seemed like a classic private and public school boy melting pot! Marvellous!


Charged the bluetooth thingies, made a coffee, hit the sack. Saaz was a noticeable absentee - obviously out partying again.
Here's a funny little anecdote to accompany this day's pics....


Below is Beatup (IanB). The Club's official photographer. (Thanks mate). The guy whose work so many of you appreciate when looking at National Rally pics and certain State RTEs... 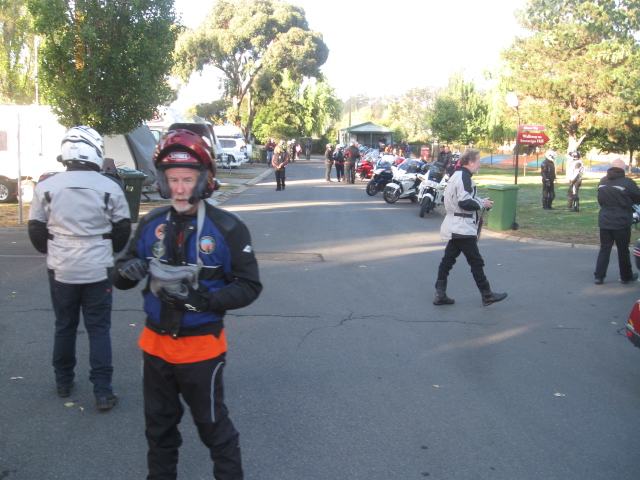 On the morning of this year's Rally Ride, we agreed that Beatup would jump on the back of my bike (STella) and take the pics, as it would be a much better result than him trying to manage riding his own bike and setup the photos etc.

We told the group that we would be annoying them all day by buzzing in and out of traffic, be stopped on the side of the road as they went by, and generally ordering them around all day to make for better photo content. This was OK by everyone.

During the OzSTOC National Rally Ride, we got some great pics and video - but probably most memorable was possibly the OzSTOC "Quote of the Rally"...

I had left the top box off STella so Beatup had no backrest, and I was quite a way behind the pack after the last photo shoot, so decided to close the gap a little... I said "hang on" and let 2nd gear wind waaaaay waaaay out before snapping 3rd and instantly returning the throttle to the stop at the end of its travel.  I can't repeat the words that came over the comms, but lets just say I got a nice little 'cuddle' from the bloke on the back.

His great quote was not long after that.... he said "I can't take any more pics! My sphincter won't let me!"...

From then on, if I wanted another little cuddle - I just had to let the revs get above 4,000!

Special mention must go the lovely Megan and Ben who rode this scooter and Ben's ST13 Pan down from the Atherton Tablelands in tropical Far North Queensland to be here. I believe Megan (pictured) was on her L plates when they left. Great effort guys - nice to meet you. 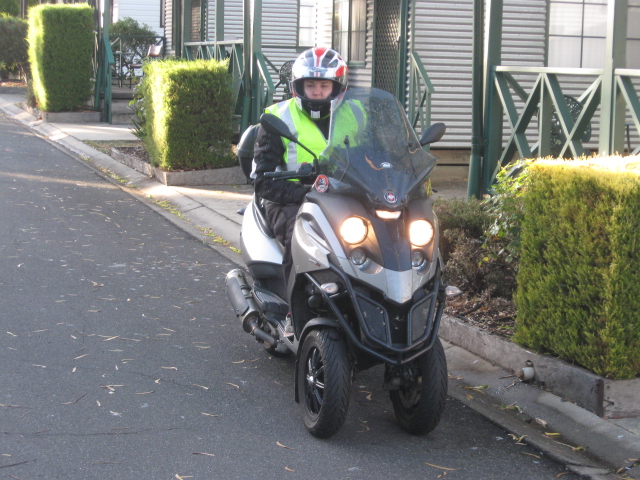 Below are a few candid shots of OzSTOC Members on the Rally Ride.... 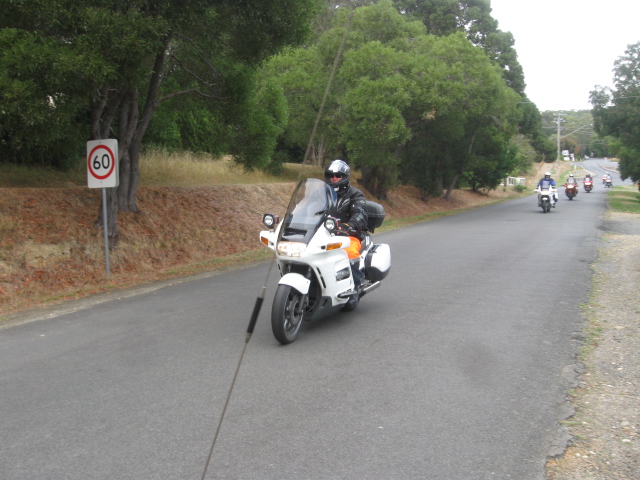 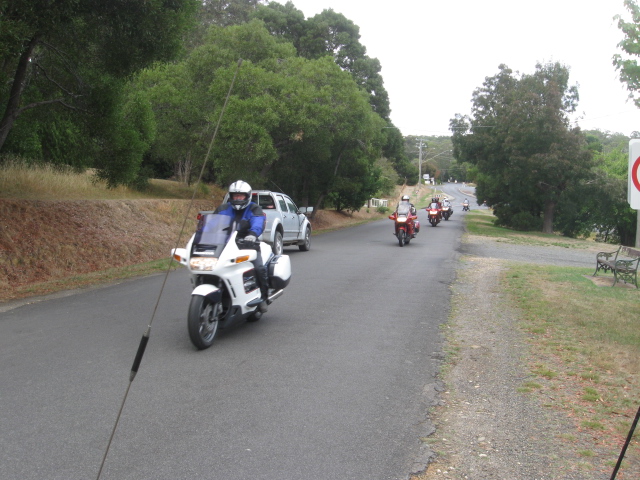 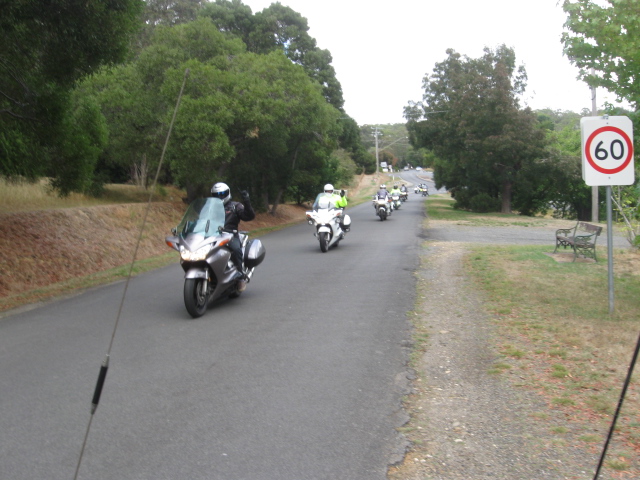 A photo op stop at Kryal Castle showed us how the Club has grown....

OzSTOC Member Ben (Me_3) gave me permission to use his fine panoramic picture of the group - you can see what a fantastic backdrop the Castle made - well done to the organisers Marcus and Dan - and thanks again Ben... 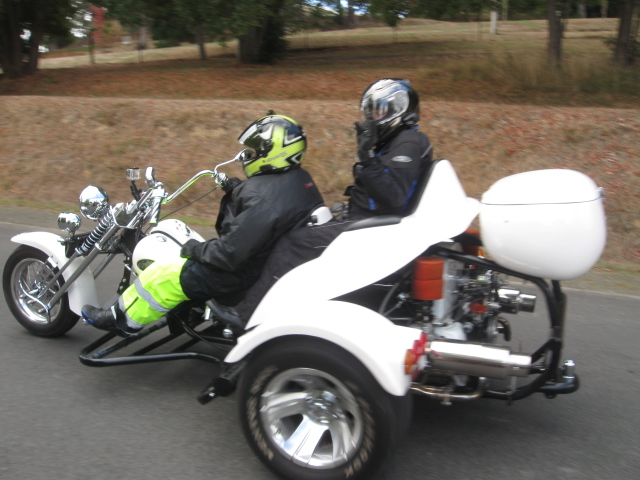 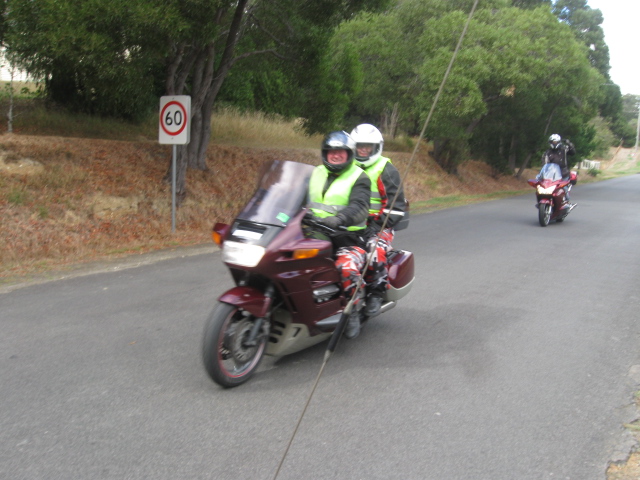 Lunch was to be held at the Blackwood Hotel in this beautiful Victorian countryside - reputedly one of Australia's most haunted pubs. I can see why - look at the scary humanoid beings below.... 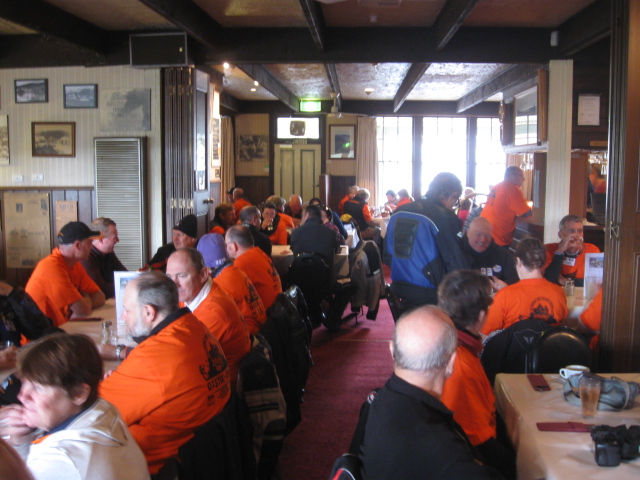 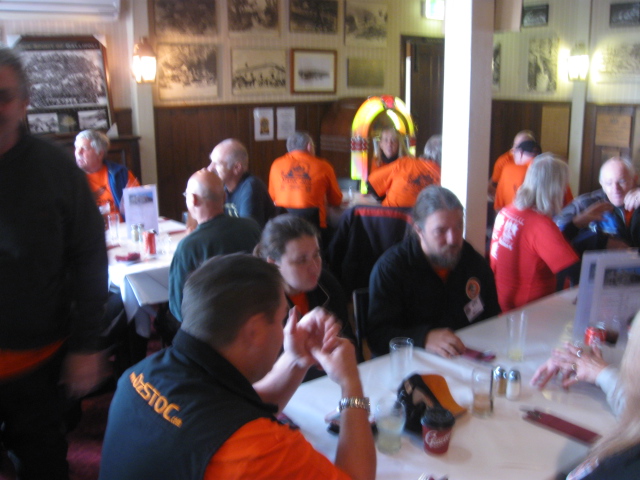 Fact is - we had a ball. The food was fantastic and the serving sizes were immense! We had organised a couple of  suppliers to showcase some of their wares and products informally to Members as we gathered at the Pub. One of which was Mark from Zen Motorcycle Gear who offered Members some amazing show specials with his finely crafted Zen line of gear - many were very impressed - thanks Mark.

Another supplier who jumped on board was CFMoto - a Chinese company looking to expand their sales in Australia by offering a competitively priced 650cc alternative to the main players. Have a look below at the streetfighter version 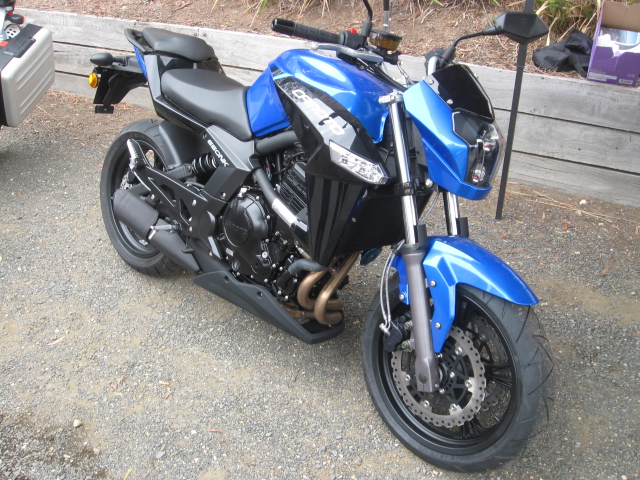 And the touring version...   I took this one for a lap around the local roads and have to admit being impressed by the appointments and quality of this bike. We were calling her the 'mini ST', as there are some obvious similarities, and many items that we like to see on bikes after owning and touring on Pans. They have really done their homework on this one. As they no longer make the Pan European ST11 or 1300s, and as Members get a little older, bikes like this may well attract our business as they are much lighter for one, and brand new at $AUD8,600 ride away, so they will enjoy factory support and upgrades/improvements for a while yet. I loved zipping around the winding roads on this bike - a lot of fun, and noticably lighter than STella. (A lot less power too). 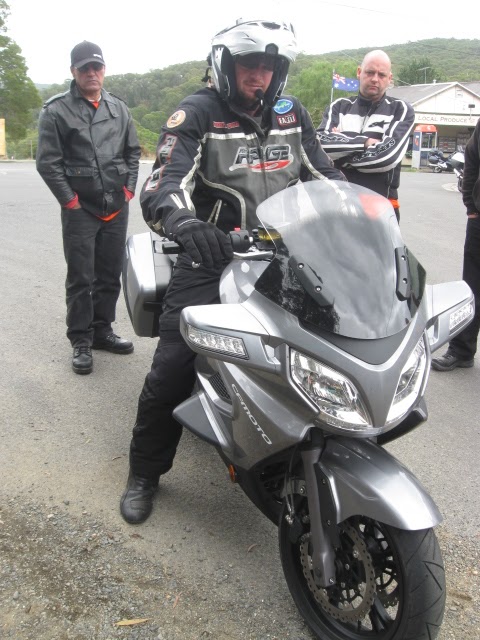 The weather held out for us well enough and we had a fantastic long stop in Blackwood - long enough for more socialising and shooting the breeze. 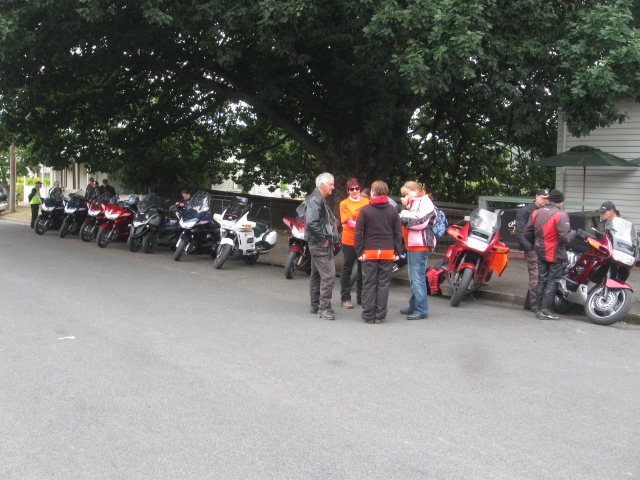 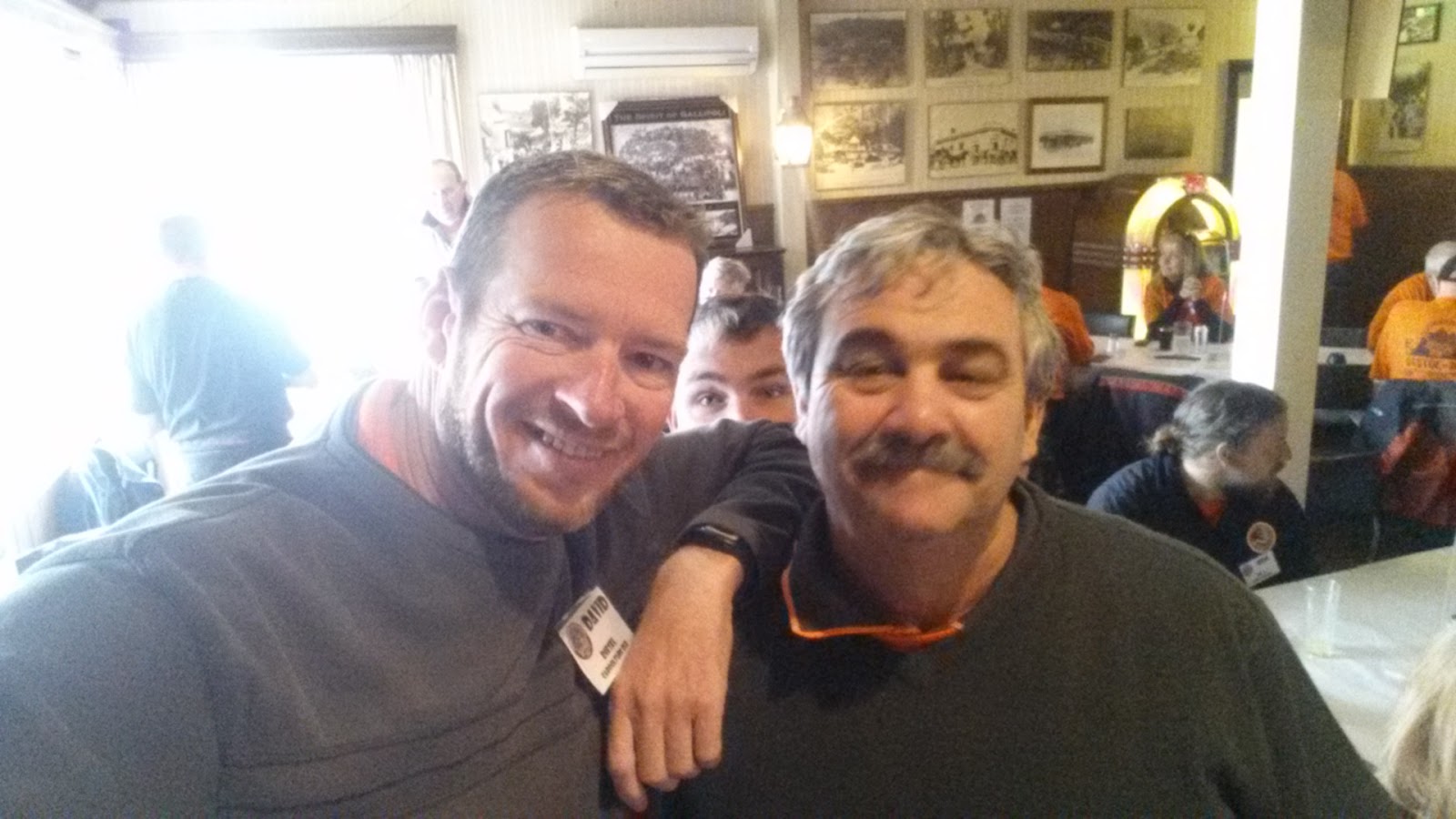 Above: Poor Wombat from W.A. told me how everytime I was taking pics of the group, and he went past, I'd miss him out - so he got a special pic with me at lunch. In the background, you can see an immature Streak successfully photo-bombing us! I don't say anything.At least HE feels special, and THAT is what counts.

We continued on for the remainder of the ride through lovely towns like Hepburn Springs, Daylesford and Creswick before hitting Ballarat again and settling in to our Tourist Park for a couple of quiet ones before getting ready for the Official Rally Dinner..... 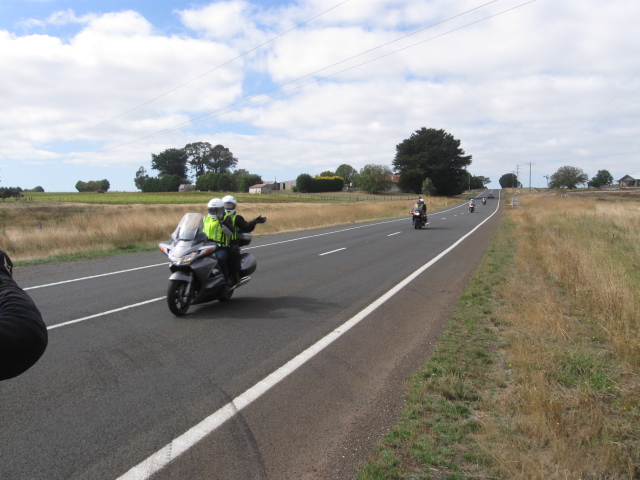 Daniel had kindly offered to drive a 22 seater Coaster bus to ferry us to the Club where dinner was being held.

They didn't know it at the time, but all the good, honest and decent Members had already been delivered safely. What was left was this rag-tag bunch of rambunctious mis-fits - and it was MY job to keep them under control until we got to our dinner venue! Boy! Talk about "To Sir With Love". I did a great job with them because when we arrived and alighted from the bus, they seemed quite respectable, well mannered, and even angelic.  *cough cough* (Everyone loves group bus trips)! 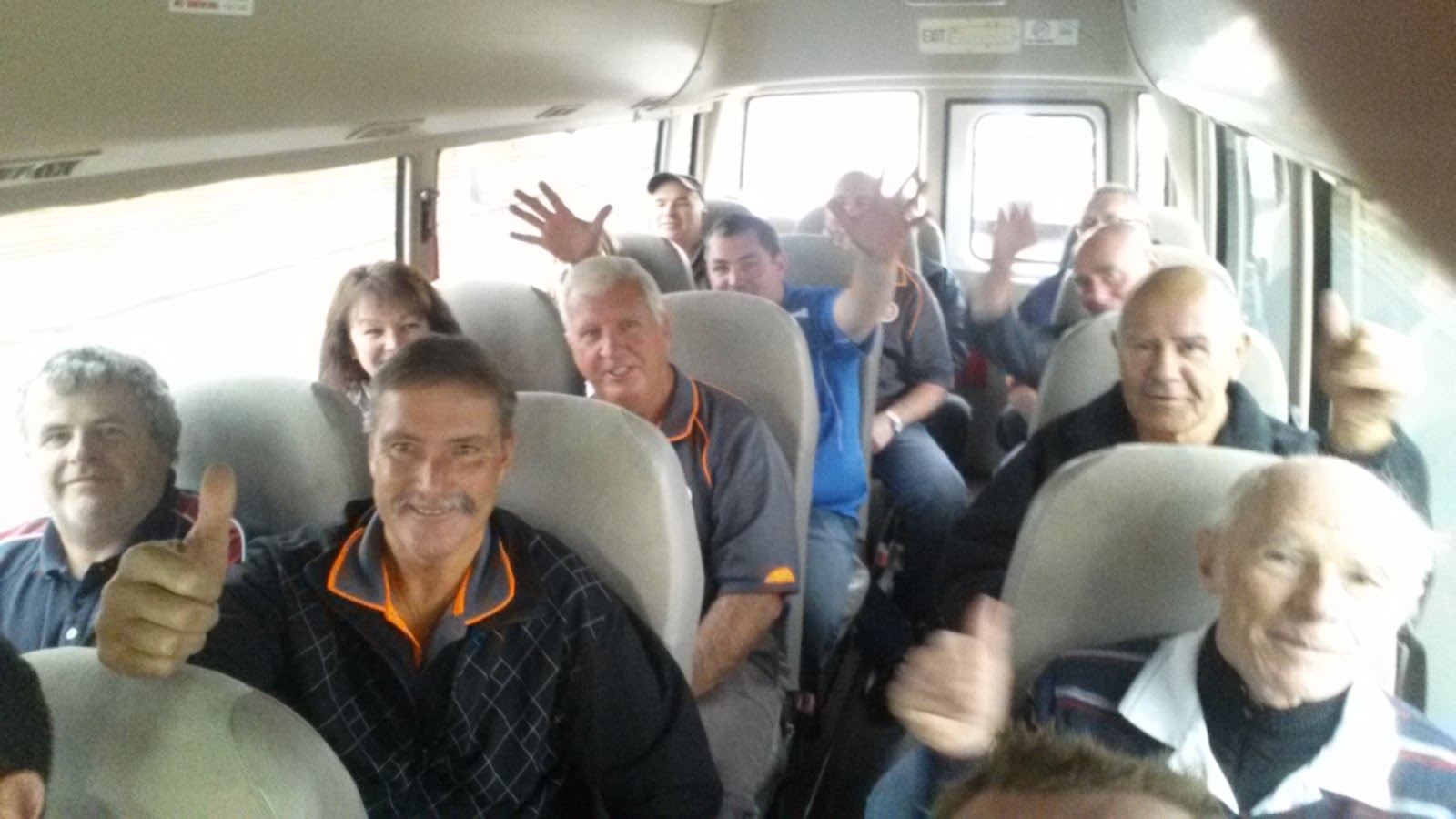 Our Annual Dinner is also an opportunity to talk to Members about where the Club is heading, what we've loved doing over the past year, and any other business worthy of heralding at such an event. I have no pics of the Dinner venue as I was out the front for most of it sharing the MC duties with Streak as part of my role at OzSTOC. We were initially entertained by a very interesting local public speaker who informed us quite well about the gold rush days in Ballarat during the 1850s while we ate. A real eye opener, and a fantastic history lesson to boot.

Then it was Streak's and my turn to address the Members, and we started off with the sombre, yet privileged task of toasting one of our great and respected Members Brad (BlueHonda) who prematurely passed away this year. A lovely moment for his memory.

Then came the thanks to all the organisers, the Members, their beloved pillions, our trophy sponsors and all other parties who deserved public gratitude for their good deeds for the Club. After this, it was OzSTOC Awards time and presentation of Trophies for 'Farthest Travelled' (to get to the National Rally), Silliest/Funniest Moment, Most Charismatic ST, Best Presented ST and OzSTOC Member Of The Year - all worthy recipients. Europeans may not understand that the winner of the 'Farthest Travelled' (Gavo) covered an amazing 4,700kms just to get there!

Lucky he was riding a Pan European! We also get the winner from last year of 'Best Presented ST' to covertly walk around and choose the new winner for this year - a very difficult choice - as was Member Of The Year - where so many people are deserving of this fantastic award.

A few more items of business, and then Streak's and my announcement that we will be stepping down from our 'up front' roles of OzSTOC. We stated that we were very proud of where the Club had come from, where it is now, and how bright its future seems. We are definitely handing the reigns over to the new team in a very strong position with all sorts of records being set for Member participation, supplier discounts and alliances, merchandise, ride calendars for each state, forum activity and enthusiasm, and even the perceived level of appreciation of the Club's family members - you all.

I am humbled by the quality of people in this Club, continuously bowled over by how friendly and willing to participate in this Club you all are. Also a little proud to have been integral in getting ST Owners from all over, to start riding them to meet other ST Owners as a friendly group. I still have an email that states my elation at achieving 50 Members. What an evolution to see National strategies and many International friends enjoying all that is put before them. Quite humbling to see OzSTOC in this age of National and State by State meets, heading towards 700 active Members, and having so many new friends around the country, and indeed the world, all enjoying this ilk.

Of course - OzSTOC has enjoyed the input of many, many people (too numerous to mention), that have contributed to the success - (I just started putting ST owners/riders together). My extremely good friend and partner in crime Streak can be counted as an AWESOME driving force in also motivating OzSTOC Members, suppliers, sponsors, publicity and merchandising for OzSTOC. You all know the effort he has put in over the years and would probably join me in thanking him for such an input - OzSTOC wouldn't be anywhere near the success it is without you mate - Thanks a trillion!

We'll still be active Members, and help out from time to time, but one thing is sure... we are extremely happy, proud and confident of the new team that will be steering the good ship OzSTOC from June on.

OzSTOC Member Of The Year - Chris (ST2UP), his lovely wife Jean (Pocket Stocker), Saaz, Brock and Whizz are now the guardians of OzSTOC (from June 2014). Much of this team remains unchanged from the fantastic Admin support Streak and I enjoyed from Jean Saaz, Brock and Whizz, but Chris' dynamic personality and unquestionable support for the orange and black colours of OzSTOC will ensure a forward moving, positive and initiative-filled direction for this wonderful Club.

A huge thanks to Pockey, Saaz, Brock and Whizz for all your 'behind the scenes' support and initiatives as well - thanks a trillion.

Anyways - a fantastic night, fantastic food, and even better company. I'm fairly confident a great night was had by all.